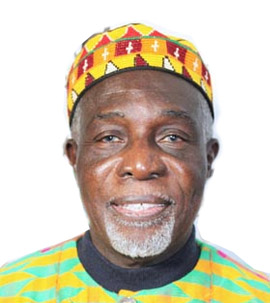 If my memory serves me right, it was on or about the summer of 1995 that few of us began chatting about the plight of GaDangmes in Ghana.

For almost three months or more, we will call each other and talk about the same-o-same-o. The deeper concept of our focus has not then sankinto our consciousness. It was at that time that I felt we cannot make any headway, if we do not take a stance. Consequently, I took a positive stand and with the aid of Brother Isaac Laryea, and John Akwei we were able to collate phone numbers of any GaDangmes who crosses our field of vision.

It was not easy at the beginning, since we relied mostly on line means of communications. We were able to contact initially, nine names. The nine of us met in John Akwei’s house and began to discuss (as opposed to the difficult measure of phone chats) how we can start the ball rolling.

The following were present at that first meeting.

There were some unprogressive individuals whose intents for getting together was more of socialization than the focus which had necessitated our coming together as a group. I insisted at the time that we needed to be more structured and go beyond the mere socialization. As in many ground floor organizations, there was strong opposition towards a structural group. But with divine intervention, we prevailed. Our numbers began growing by leaps and bounds. The following brothers and sisters all joined the band wagon. Dr. and Sis.Madjitey. Sister Florence McCarthy, Sis. Julie Ababio, Bro. Ribeiro(deceased), Bro. Larry Fiamaphle, Bro. Griffith Ayitefio.Bro. and now Dr. Borquaye, Sis. Joana Cyrus, Bro.Moses Adams, Bro.NarhAnsah, Bro. Mensa Klogah(deceased), Sis.MercyAkrong and Slim, Bro Dan Adjetey Bro. Ernest Mensah, Sis. Asiedua, Sis. Florence Rogers.and Dr. AdjeteyLomo.

(My pardon if any name had skipped my memory)

The above named individuals all joined forces and we were soon on our way for a formidable organization.

We did not waste any time. With Lawyer Aristotle Kotey’s instrumentality who had joined us, we were able to write and subsequently adopted a constitution and by-laws for the association.

I was elected the first president alongside with the following officers for the first administration. We served for two terms from 1996 through 2000.

Our initial name like most of the Ga Dangmes at the time was Ga Adangme. With time, in accordance with the mother organization in Accra, the name became GaDangme.

To date I do not know of any GaDangme association name globally that go by ”KPEE” which also means association. And so it was included when we wrote our constitution and the by-laws. Hence the name, GaDangmeKpee of Greater Houston.

As stated earlier, one of the main focus of our KPEE was to provide an opportunity for GaDangmes in the diaspora to develop a forum for activities and effective strategies to stimulate discussions and debate as well as an opportunity to meet with other GaDangmes globally. Consequently, to organize, regular social and educational activities in tune with our culture.

At the same time, have a forum to reviewing issues befitting Ga Dangmes. It goes without saying that, we have traveled thousands of miles away from our ancestral homes. And as history always defines the struggle and aspiration of a people, we were compelled to shape and preserve our culture and language through our activities as best as we could. That was an element to infuse respect and dignity among ourselves as GaDangmes.

Through our concerted efforts, we have been able to stand tall in the annals of organizations in the Houston Metropolitan area.

Historically it is un-cool to toot one’s own horn, but since my tenure of office, and subsequent administrations there has been glitches and minimal lapses coupled with cul-de-sacs on the road to our objectives. Yet, the seed that was sewn twenty years ago continue to yield not only fruits but succulent fruits.

When something begins with anyone, one keeps on ensuring that the path of the mission keep on keeping on, even in the face of dire obstacles. That is why some of us sleep, drink and eat with our KPEE. That has been my mission. A man after all sticks to what he loves most. Never-the-less, I feel incapable of my achievements if some of the names mentioned above had not been at my bet and call.

Having realized that the Gas and the Dangmes are a common entity with a common goal, we were able to combine the rituals of the Krobos, the Shais, and the Ada’s in our annual celebrations.

Our first festival celebration took place on the 4th of October in 1996.

Over the years, we had choreographed and danced Ga Dangmes cultural dances. These are: Dipo, Kpanlogo, Kpatsa and Kolomashi to highlight the combined celebrations.

I will be amiss if I do not mention the nucleus of our initial dedicated dancers, when it all began. They were Ben Biney, Florence McCarthy, NiiObliArmah, Sam Borquaye, Solo Tettey, Justice Addo Moses Adams, Dorothy Ayitefio, and Ruby Lartey. Later, Trudy Brown, Charlotte Portofy and Monica Sasu became some of the regular dancers.

The most interesting and significance of our dancing comprises our childrenranging from the ages of four and five. They were spectacular in the Dipo cultural dancing, choreographed by Sister Korkor also known as Aunty KK.

Some of the concerns that necessitated the birth of GaDangmeKpee, which also became the focus of the GDI..(GaDangme International) were as follows.

There were three main exciting events in the history of the GadangmeKpee of Greater Houston.

Apart from our annual festival celebrations, we were privilege to bring a live band (The Dansika Band) from Chicago with Joe de-Atiso of Ramblers fame during our 5th Annual celebrations. This was held at the Edwin Honberger Conference center at the famous Medical Center in Houston.

The second most exciting event was the hosting of the GDI– GaDangme summit during Bro. Solomon Tamakloe’s administration.

The third exciting event and accomplishment was the presentation of Rodney Ellis proclamation to the GaDangmeKpee of Greater Houston, during Bro. Joe Stephens administration. I want it to be on Records that it was through my contacts with the State Senator, Mr. Rodney Ellis Texas senate 13 District that we were accorded the recipient of the prestigious award. The proclamation was read on behalf of the Senator by my son NiiOblifioArmah who was at the time on an internship in the Senators office.

GaDangmeKpee is proud to inform members and others that Houston has been represented in all the GDI Summits except the 5ththe 6th and subsequent Summits.

Houston distant itself for a reason from the GDI Summits. There were dissentions from two different groups hosting the summit at the same time.

We felt that Houston could not associate herself to rival groups fighting for a common goal.

The following is a breakdown of GDI Summits held so far with Houston Participation.

Many members had periodically asked to know about the symbolism and the meaning of the GaDangme logo that appears on our brochures and recently on our united outfits.

I therefore take this opportunity, and privilege to explain it herewith.

I’m particularly intrigued that we have lived to see the growth of our KPEE and the manifestation of at least a fraction of our goals. This I dare say is no mean achievement. I am referring here, with our accomplishment at Dogo.

We have been able to build a school at Dogo in the Ada Area of GaDangme.

From humble beginnings, contacting individuals, holding meetings at individual homes to where we are now is highly commendable.

The GaDangmeKpee of Houston is still hurdling obstacles to reach our main focus and destiny. With the current and subsequent administration aided by divine and selfless individuals, and not by inflated egos, I have a strong conviction that we shall reach where we want to be. After all, we know we have come from afar. This is enshrined in our anthem. WO DZ3 SHONN!!!.

2015, promises to be our 20th anniversary. It is my firm belief that we should all bury our differences if there are any and shoulder the heavy responsibility ahead of us for a grand 20th anniversary. Ekomefeemo mli hewaleyoo.