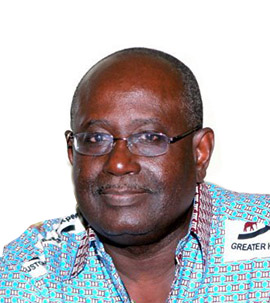 Vice President Solomon Tettey:  He was the pulse of the administration. He brought enthusiasm, hard work and a dogged attitude for successful outcome to his office.

The focus of this administration was:

We started to amend the constitution to align association obligations for a sustainable future. We changed our contribution to members for immediate family bereavement from $1,000 to $500

Our financial account was negative when we took office. We had less than $200 in the bank account.  Dr.  George and Mrs. Toshie Madjitey converted a loan of $2,500 given to the association to a gift to help our financial position.  In appreciation of their kind gesture the association conferred Lifetime Membership on the Doctor and his wife.

A check of $400.00 was mailed to Dr.  Adjetey Lomo to repay his loan to the association but the check was not cashed so we wrote him a letter of appreciation. Thanks again to Doctor Lomo.

Non- GaDangme membership was greatly encouraged to honor the words in our traditional GaDamgbe prayers “ablekuma aba kuma wor”, meaning “people of other tribes should be welcomed to join our ranks”.

We had huge participation from Oklahoma City of about 30 for each Homowo and about 20 from Dallas. The Houston, Dallas & OKC brotherhood was strong.

All but one of our meetings was held at the YMCA on Fondren due to a letter from the landlord complaining about our activities on the premises.

The GaDangbeInternational confusion was permanently put on ice in Houston as far as this administration was concerned. The issue of our financial contribution to the GDI and the lack of direction from the leadership were contributing factors and I did not encourage Houston participation. Some on the board were very enthusiastic about the GDI.The VP., Solo Teetey, Nii Obli, John Akwei  Joseph Seth- Larbi and a few others helped organized a national forum in Houston. We received $300 from the GDI for the event. I travelled to London and did not attend.

There was a veiled split in the association between the GA and Dangme factions. This was not openly talked about but was a cancer during my administration.  Even my ethnicity of 50% GaDangme, 25% Fanti and 25% Ewe was a reason for some complaint. My VP Solomon Tettey gave me cover from the many fireballs that were thrown my way. I am saying this so that future leaders and members will be aware of the bigotry that exist in some of our members and  can destroy our association.

History was made when we handed over to the first female President and of Dangme heritage. This brought the dwindling Dangme membership up and the trend continues today.

Chieftaincy and Pouring of Libation were some of the issues of our time. I was not and still not for us enstooling a Chief and will fight to defeat any such advances in the association. The pouring of libation was a non- issue for me but a large portion of our membership had strong reservations about that and almost quit the group. The politics was not right for me to table the vote at that time. I also don’t believe it has any effect on anybody or anything. Freedom of association and freedom of religion is guaranteed in this USA and trumps our wishes and preferences so let the Libation Practioners have their peace.